I know the story. You know the story. Charles Babbage invented machine computing, but the technical sophistication of the time wasn’t up to realising his dream. Alan Turing worked out the theoretical basis for computing during the day; while cracking Enigma, and incidentally laying the foundation for the hardware, at night. Then the Americans invented the transistor, the mouse, gooey skeuomorphism and the internet. In that entire time, the country that invented the automobile, made rockets practical, produced Siemens and BASF did – nothing, right?

Until yesterday, I had never heard of Konrad Zuse. I had no idea that he built a Turing-complete machine in May 1941 and designed the first high-level programming language before 1945 was out. His company survived into the 1960s. The Deutsches Technikmuseum Berlin has a reproduction of his first machine, the Z1, built by Zuse himself. The original was designed and built between 1935 and 1938. He didn’t call it the Z1 at the time, he called it the Experimental Model, or VersuchsModell 1 – V1 for short. After the war, not so much. Whatever it was called, and however well it worked (the Z1 was, apparently, unreliable, unlike his later machines) it was the first programmable machine using Boolean logic and floating point arithmetic. It was also, at least its reproduction is, absolutely beautiful (see above). The original was bombed to bits in 1943.

We met Cara at the Technikmuseum. I enjoyed it. The boys – Seb particularly – found a display in which one formed the binary equivalent of various decimal numbers fascinating. They weren’t much seized by the rest. I wish I had got to the space part, because space. But the kids wanted to move on to the Spectrum Science Centre, because they so very much want to have another experience like Questacon in Canberra. In vain. The centre attached to the Technikmuseum here is bright, modern and all hands on. But, in the boys’ opinion, it lacked the magic of Questacon. Perhaps it just lacked a vertical slide.

I had left it too long after breakfast to get some food into the boys, I think, because the next step was a long sulk from Seb after he interpreted (correctly) that his brother (pretending to) play a game on his tablet was designed to tease. He clocked Raf and then wouldn’t eat. It was a long and very tedious negotiation to bring him back to us. We got there eventually.

Across town to Museum Island, me pestering our native guide at every unfamiliar sight (which was, of course, all of them). I ridiculed what I saw as the antiquated ticketing system, depending on semi-legible stamps from a machine that is always at the wrong end of the platform. Cara advised that inspectors regularly prowled the train, and they did not wear uniforms. As if summoned by incantation, two young men in severely fashionable haircuts, tight jeans and an energetic – even muscular – physical presence appeared and demanded to see everyone’s papers. The one who approached us was bearded. I half expected to be told that while my ticket was adequate, it was inferior to a more difficult to obtain one handwritten by a poet I’d probably never heard of. When I mentioned my impression of hipsters to Cara, she frowned, and suggested that gangsters might be closer to the mark. 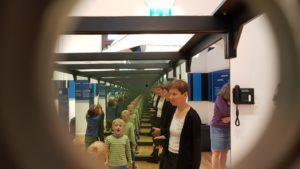 The architecture of the city leaves me with a lingering sense of the unusual. The large Lutheran cathedral loomed over the Lustgarten, as ornate and domed as anything in Rome, the new German Protestants apparently at ease with the grandiose. Schinkel’s Friedrichswerdersche Kirche looked like someone had described a gothic cathedral to a 19th Century industrial engineer who had never been in one, given him a pile of red bricks, and told him to have it ready by Friday. Its clean lines look towards modernity, but it also looks squarely backwards, as chimerical a building as I have ever seen, and as ugly as all two-faced things. One might admire it, but I cannot imagine anyone worshipping an awesome God in it. Apparently the Berliners felt the same, for I have since learned that it was deconsecrated and later closed indefinitely due to structural damage from building works nearby. They are rebuilding the Stadtschloss, knocked down by the DDR in the 1950s and replaced by the Palast der Republik, knocked down in its turn by decree of the reunified parliament in 2003. Disney Berlin, Cara calls it, with what sounds like amused contempt. If there is also anger, she keeps it to herself.

So we were standing in the former East Berlin – a place that for the first 20 years of my life was, in my mind, a prison camp stuck in a slightly twee and embarrassing past – a sort of 1950s German Scarfolk. Now it was a boring bus stop. I realised that I must have wandered across the former border a dozen times and never noticed, and despite what the guidebooks say, I had not noticed the change in architecture, or not attributed it to political history, because even in the western parts of the city that I had seen, it had felt like a patchwork that didn’t quite fit together. Potsdamer Platz the day before had been a soulless wasteland, its shops merely low rent versions of the ones I was to see the following day in the Mall of Berlin, about 100 metres away. Unsurprisingly, there was no-one there. We could walk sterile blocks in the centre of the city on a workday afternoon and see no-one, nor get any sense that pedestrians had been factored in to any plans. Other parts of the city were as messy and organic as sex, or a migraine. At the time it made no sense. I would really only see the border – the real border, or one of them – the next day, this afternoon, as I write.

The Neues Museum was our last stop, and only a short one as Raf had had enough. Negotiating a too brief visit and agreeing a meeting spot with him, the rest of us dashed into the museum, headed like an arrow for its party piece, the bust of Nefertiti. Like an arrow, that is, which is shot, bounces off a wall, drops to the ground, is picked up by a passing child, carried to another town and finally sent back to its original target by mail. Getting lost was our good fortune – we saw, albeit briefly, much of what the museum had to offer, the most interesting of which was a range of bronze and early iron age artefacts from central Europe, creations of the so-called Hallstatt Culture and its predecessors. Helms and weapons, of course, but also domestic implements, torcs, symbols (and stores) of wealth and signifiers of status. My first sense of a real people for whom the rise of Greece and Rome was distant news, and occasionally trouble on the southern border.

In, at last, to see the bust, and it is breathtaking – quite a different experience in reality from the impression you will receive from pictures. The sense of a real person, so much more than any monochrome marble, is overwhelming – intelligent, confident in her position both as a semi-divine ruler of a great people and, certainly, a very beautiful woman – that more common condition but no less transcendent. The gap of time over which those eyes stare back at her audience is 3,300 years, and never to me has such a gap seemed so tissue thin.