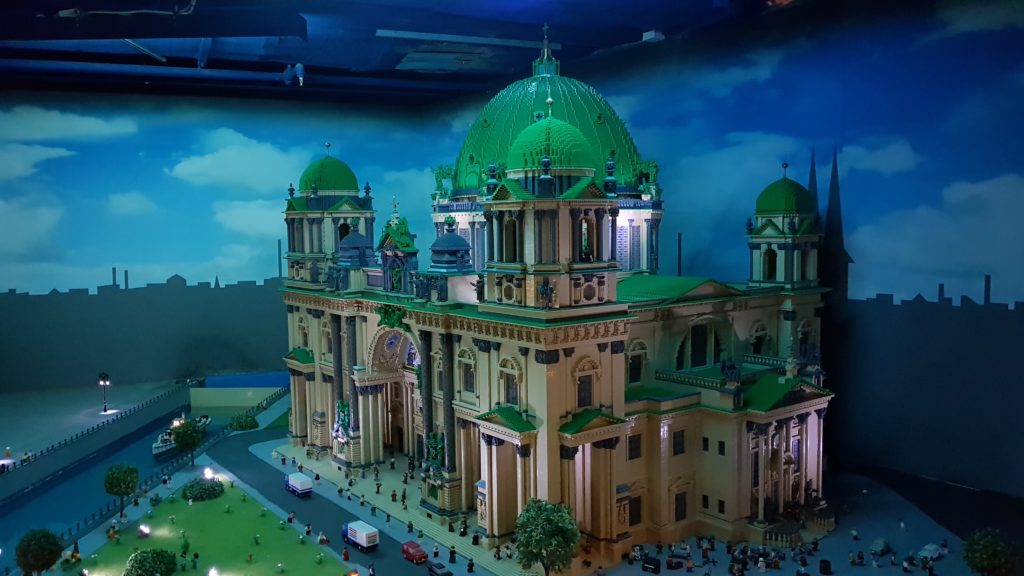 A day for the boys, at least the first twelve hours of it. Their pick was Legoland at Postdamer Platz – which is exactly what you think: a Lego shop with a Lego exhibition and a café attached. Two full hours for the boys to run around and play in an all-plastic, primary colour, indoor setting. The coffee was adequate, sold to me by a Sydneysider who is “stuck here, because my girlfriend is German”, which may or may not bode well for the relationship.

The highlight was definitely the “4-D movie”, a fifteen minute short with the characters of The Lego Movie triumphing over whatever we’re supposed to triumph over these days – copyright infringement and the gig economy, by the looks. Unlike at the Centrepoint Tower, their claim to the fourth dimension rested not only on occasionally turning on the sprinklers but also flashing lights in our eyes and, on one occasion, spraying us with spume. The movie was, natch, far too loud and in German (“ohhh, man, das ist nicht gut”). Accordingly, if you closed your eyes, the experience was of someone shouting at you in a foreign language while lights – clearly visible through the eyelids – flashed on and off for no obvious reason and at random intervals you were sprayed with a range of substances until you were moist. I found the whole thing strangely relaxing.

Further observations of Germans (or at least Berliners and their city):

Contrary to previous observations, in fact they smile and laugh just like normal people, regularly and uninhibitedly. It is possible that they just don’t smile at ignorant foreigners who are approaching them, obviously about to ask for help in their only language – one the native Berliner learned the hard way, in school.

Berlin, or the parts I’ve seen, is not a rich city. The Hauptbahnhof is the anomaly – the rest of the city is not clean and free of graffiti and does not look like it teleported in from a utopian Star Trek-style future. It looks very lived in indeed. When it rains moderately heavily, as it did today, the U-bahn walkways flood with muddy ooze, which they try to vacuum out with equipment at least 20 years old. The U-bahn itself is probably a shade grubbier than in London or Paris.

The former East Germany pops up in the unlikeliest places. Tonight we ate with Andi’s friend Cara, her sister, Eva, and Eva’s young daughter. Eva works with a political foundation connected with the Left Party, a coalition of western radical leftists and the successor grouping of the former ruling communists. On its staff, she tells me, are former academics and politicians of the old East, including the last communist premier, Hans Modrow. Also survivors from the east are the Ampelmännchen – the little green men who indicate when it is safe for pedestrians to cross a road, which is weird, because they’re oddly anachronistic in their gender specificity and headwear, and have only one, disturbingly oversized, arm apiece. Astonishingly, also a former communist innovation since adopted in unified Germany are green traffic light arrows allowing right turns against the prevailing red light – remembering here that Germans drive on the right. Apparently the idea that people might safely nip round while not interfering with other traffic simply never occurred to the people who have, for scores of years, built most of the best known quality motor vehicles on the planet. Clearly, whatever their shortcomings on the economic management front, and the not turning your country into a secret police-ridden paranoid shithole front, East Germans knew a thing or two about traffic signals. 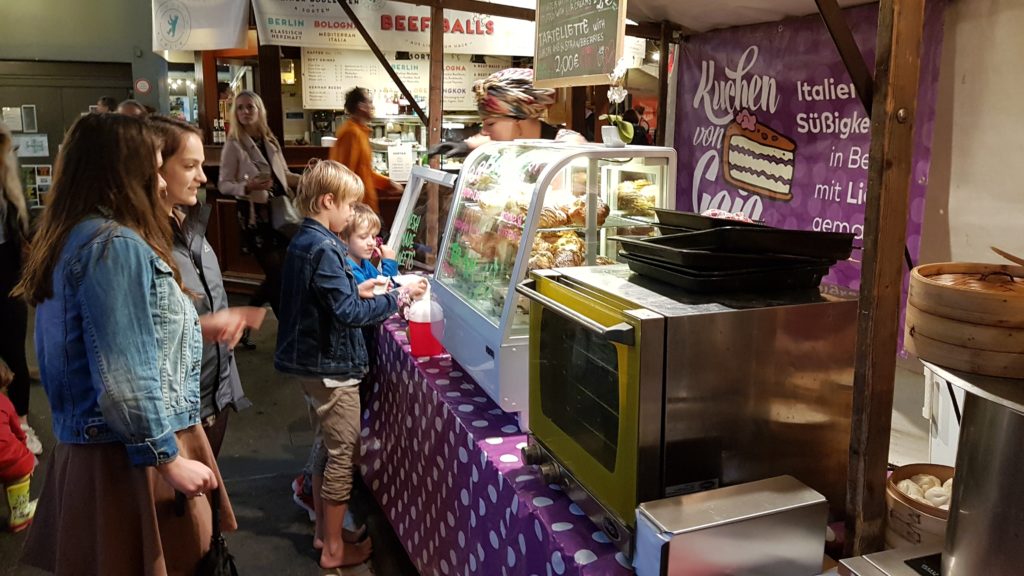 Dinner was at the Markthalle Neun, on Eisenbahnstrasse – my first look at Kreuzberg. This feels like a real place lived in by real Berliners, no souvenir stalls or kitsch bars, the graffiti complaining of gentrification. But my impressions are limited by the need to form them through rain-obscured glasses, trying to leap the deepest puddles while dodging cars, because the forecast showers have made themselves at home and become a steady, soaking drench. By the time we get there we’re all squelching as we walk and Raf very sensibly kicks his sodden shoes off altogether. It’s wonderful to have some adults to talk to, and I shamelessly bribe the children with an extra dessert to buy myself another hour. They nearly keep their end of the bargain, too, but too soon we have to wrap things up. Plans are made to do the Technikmuseum tomorrow and that is that, save for a further squelch back through the fading light, towards Schöneberg and bed.

Europe 24 – Everything is Awesome
Tagged on: Berlin    Europe    Germany    Lego