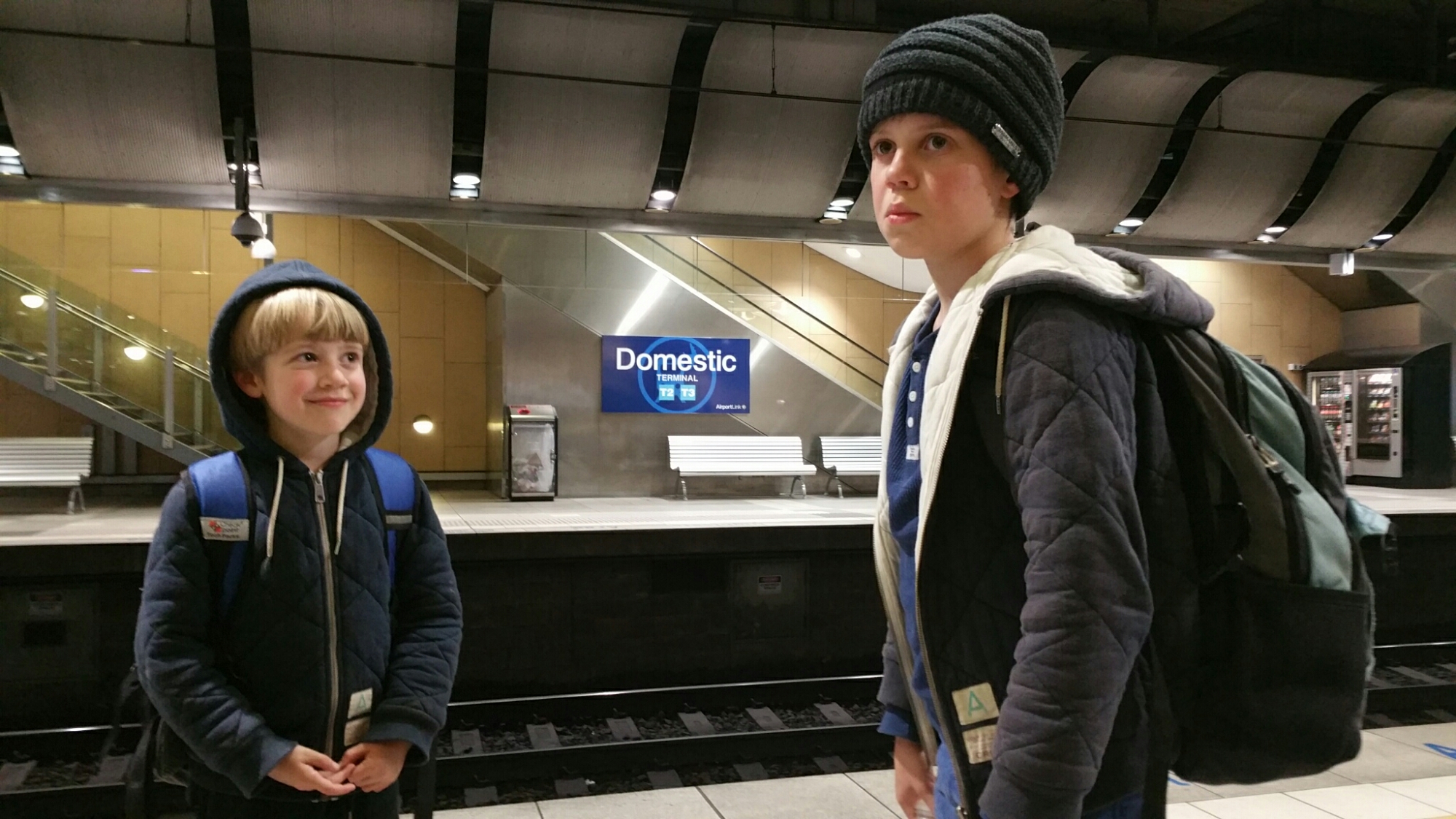 Under 7 football (a win), a federal election (result pending), arancini and a flight to Sydney for me and the boys. A fullish day.

It certainly started well. The conditions were classic football, Australian version. There had been rain to clean the air and the world, and so the game was played in those fine, clear winter colours, the grass lush and vivid, the mud like chocolate fudge. I forgot my studs, but managed not to go arse up. Also, we won, about 6-0. More importantly, some real passes were made. Even, occasionally, some moments of actual positional play sparkled against the background of reactive hoofing and full-blown off-with-the-pixies cloud-staring. Pity all but one of the goals were solo efforts by my most gifted youngster. One can’t have everything.

From team sports to democracy, where the time in the queue for the polling booth gave me a chance to teach Westminster government to Seb. I’m not sure how much sank in. The best moment may have been when the elderly gentleman behind me, arthritically clutching his how-to-vote card issued by the Christian conservative Family First party, observed for the benefit of his wife and with an air of self-congratulation that Australia had not fallen victim to the spread of right wing populist parties seen in lesser countries. Into the booth to cast my vote for the Sex Party/Hemp (marijuana decriminalisation) alliance. I searched the rest of the ballot for the chance to indicate my approval of rock’n’roll as well, but the trifecta was not to be.

Home, friends, rice balls, hasty clean up, hasty completion of an insurance application for work, hasty packing and into the car. Picked up the key to my boss’ Sydney apartment kindly lent for a few days and then faced the problem of what to do with the car for a week. The long term car park at the airport is expensive and also, according to the website, full. Could park several blocks from the airport and walk, but three bladders are getting full. Solution: park near Anna’s mother’s place. Not sure if she’s in, but I figure we can either use her toilet or her garden. If she is in, she will either be cross that we have treated her house as a public convenience or pleased to see her doted upon grandchildren. If the latter, however, she will probably use the “visit” as a stick with which to beat her hapless daughter for not being as attentive. Neither prospect is ideal, but nor yet is the three of us getting arrested for public urination. In the result, she’s in, having been home all of fifteen minutes from her own interstate trip. She seems pleased. Sorry, Anna, if we have laid up trouble thereby.

Taxi. Airport at night, always romantic. Raf realises at the security gate that he is carrying his pocket-knife. Malcolm the security man kindly offers to hold the knife while we find an envelope and stamp to mail it back to ourselves. This entails a trip back out onto the concourse to find a post box, but ten minutes later we present ourselves at the scanners once more. This time, apprentice covert operative Raf sets his phone camera filming and pointing upwards as it goes through the scanner. Unfortunately, the resulting video reveals only that it is pitch black in the X-ray box, at least between 400 and 700nm wavelengths.

The flight is uneventful, and successfully navigating the airport train into the city provides an easy sense of achievement. Walking through the city at night, bright lights but few people. The hotel room is comfortable, the election result still not clear, save that we in Mayo have at least ejected the oafish local member, setting sail for political parts unknown. And so to bed.

East of Eden – Day 1 – Three Men and a Vote
Tagged on: Family