Further observations about Florence: Trees are too good to waste on the poor.

At a certain point today, the need for some sort of greenery got to us all, but especially Anna. The map suggested that a large garden – Il Giardino de Boboli – was to be found on the south side of the Arno, behind the Palazzo Pitti. I’m sure it is, but after going through the gate that the map suggested, to be told that we were going the wrong way, and then going to the entrance, to be told that we needed to go to the ticket office a hundred metres further on, then realising that if they are charging €7 a pop to get in it’s going to turn out to be one of those formal European gardens where you’re not allowed actually to touch anything that grows, we gave up. What we really needed was a place for the kids to run around on grass for a bit. The map suggested that two other gardens were nearby-ish. They probably are. The walls around them suggest that something quite nice is there, anyway. At the second one, we spoke to a chap and asked him if he knew where we could take our now busting seven-year-old for a wee. Misunderstanding, he gave us directions to the nearest public park, which the map shows as a tennis court sized area in the middle of a roundabout that it doesn’t even bother to colour green. Maybe he didn’t misunderstand at all. We went to a bar, instead, where I bought two bottles of water and a bus ticket, and the others bought some relief from their nagging bladders. The bus was a half hour wait, so we had a coffee across the road. €1.30. Back in the land of the civilised. 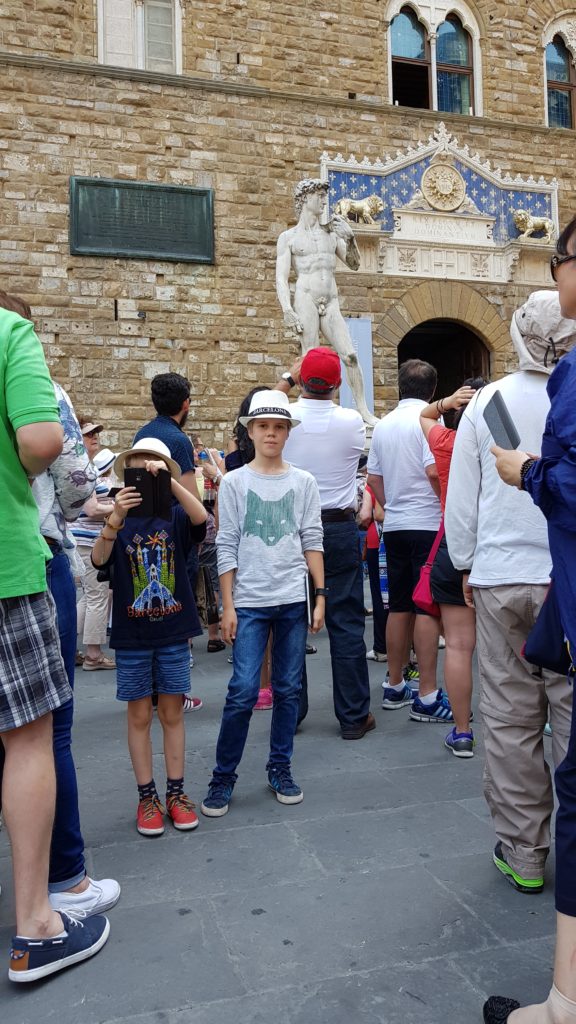 Before all of the above, we had strolled. Saw the replica of Michaelangelo’s David outside the Palazzo Vecchio. The photo above of Sebastian is not a mistake – that’s what his face looks like now, as far as I can tell. Found a tiny geocache in a lane just off, and ran into another couple of cachers – the first time we’ve ever done so – an older couple from the Netherlands (according to her) or Holland (according to him).

Later on, I went for another ramble, and accidentally tripped over the cathedral. The main one, with Brunelleschi’s famous dome. We will go back for a proper look tomorrow, but the picture below is pretty much my first sight of it. In the evening, a carousel for the boys in Piazza della Repubblica. No time for more details now. 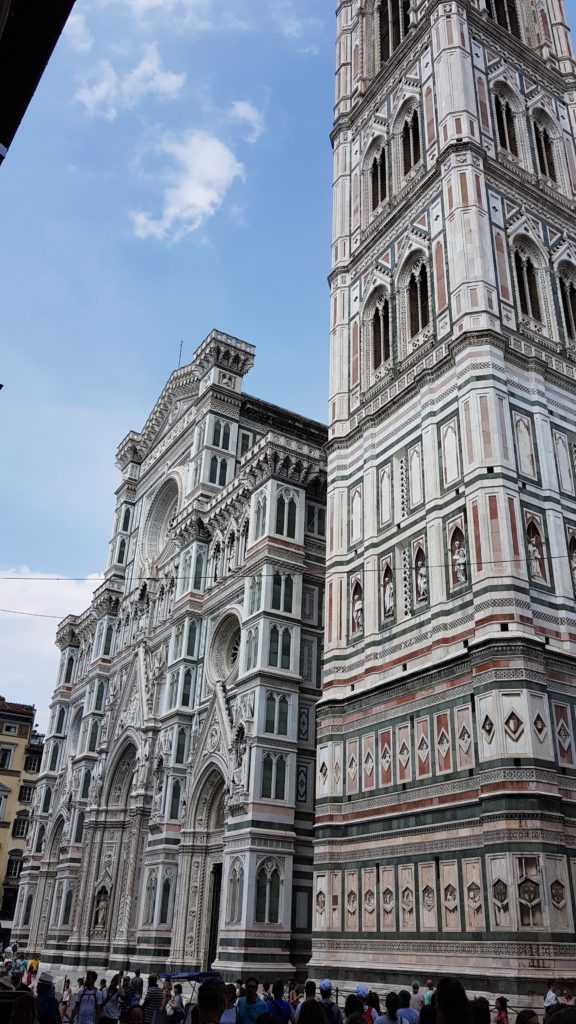