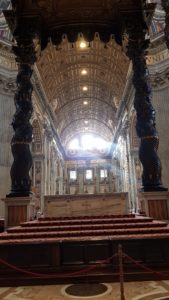 Right then, not going to spend another day deciding the queues are too long, so it was up at can, military precision, breakfast, street, bus, at St Peter’s Basilica only minutes after the target 0700h. Straight in, my fingers were twitching as they tried to obey the “no photography” signs until right in front of me a bloody nun was waving her phone around like an American tourist (which, of course, she may well have been). I looked around and all of the unitiated, unwimpled American tourists were doing to same, so stuff that. Out the phone comes.

Raf was the first to break, after about half an hour. Sticking to our plan (“we do the churchy stuff first thing, boys – after 10am the day is yours”), it was round to the Pantheon next, where at a café outside I paid $9 (€6) for a coffee for the first and, I trust, last time in my life. Again, we were there before less experienced travellers like the poor fools we were the day before were out of bed, and we’re straight in. So that’s the best preserved ancient building in Rome seen, tick, along with the tomb of Vittorio Emanuele II, also tick, and that of one of the Umbertos, also a Re d’Italia, and you’d think I’d be able to keep ’em straight, wouldn’t you, given that there were only ever a handful of them, but let’s face it, there were only ever a handful of them – they only hung onto the throne for a century, and they couldn’t stop the country being taken over by a posturing bantam in jackboots on the very wrongest of all of history’s sides. So, y’know, fuck ’em. 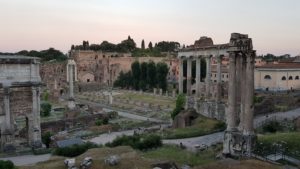 Back to the apartment then, and the boys wanted to go geocaching, so we did, and found one in two tries, a sneaky little spot just off the Campo de’ Fiori. The rest of the afternoon was idled away by the boys while Anna and I, in a probably actionable neglect of responsibility, made sure that Raf could reach us via Hangouts and then buggered off down the Via dei Giubbonari where, in scenes never before witnessed by Man, Anna stood still long enough to be eased into a decent clothes shop, where a superbly enthusiastic shop assistant took over and, many euros later, we emerged with several additions to her wardrobe nodding towards style, sophistication and just the right amount of street. Also, at least an implied promise that I’m allowed to throw away some of the op shop misjudgements that occasionally still get an airing. For an idea of the new kit, see yesterday’s post. My own new jacket purchased a moment later seemed a mere afterthought.

After that, once again, the tired throng hit the hay and I had one last roam around. Among other things, up the Capitoline Hill I slithered for a look at sunset, pictured below. The photo of some part of the Forum, above, was taken moments later, on the other side of the hill. By the time I got back to Il Campo it was well past can’t, but I needed to try a cacio e pepe to complete the Roman trifecta, after Saturday’s amatriciana and lunchtime’s carbonara. It was fine, but won’t replace either of those others in my heart any time soon. Tomorrow, Florence. 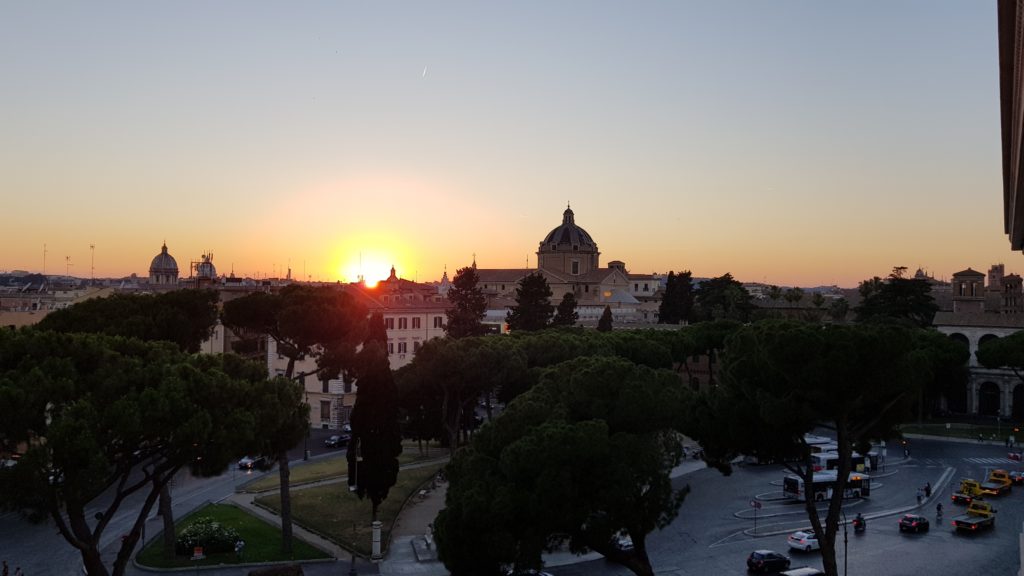