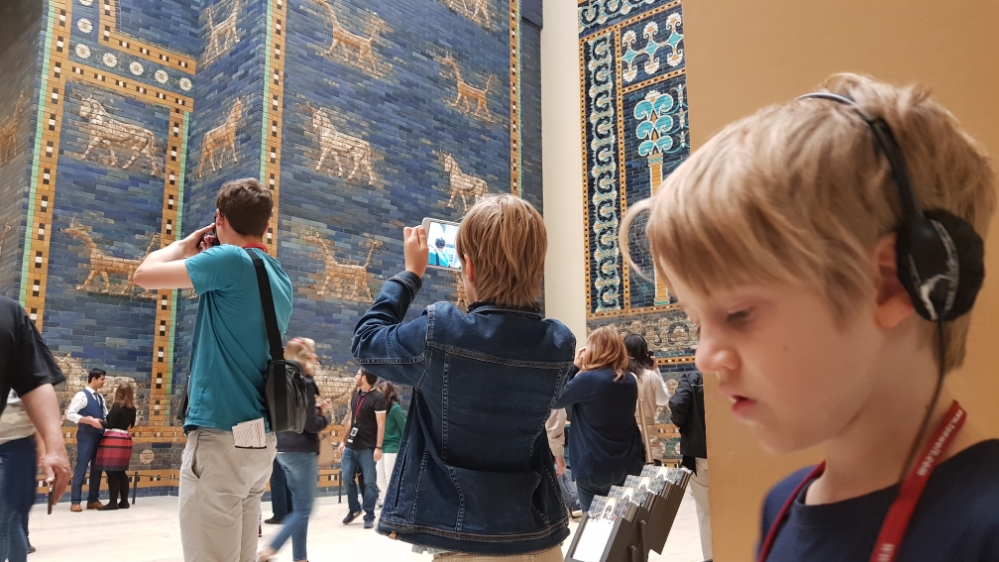 The way to do museums, with kids, is hit ’em early, while they’re still waking up. Also, audio guides.

“That queue will be at least an hour,” said some bloke to some bloke I met in the queue, who relayed the message. Bloke didn’t know what he was talking about, blessedly, and about half an hour later we were inside the Pergamon Museum. We managed to stay better than two hours. Audio guides, I tell you. Winners. Seb was happy as Larry going from exhibit to exhibit, dialling up the narrative – produced with an adult audience in mind, mind you. Raf did a few, and today I wasn’t minded to push it – if he wanted to spend some of the time sitting on a bench waiting for us, that was his business. He did see the Ishtar Gate with us, and we all marvelled. The other highlights, for me, were some Hittite artefacts – a light on the early first millennium BCE I hadn’t previously had shone for me. The Assyrian friezes were impressive again – again, because the best pieces are copies of those we saw in the British Museum. 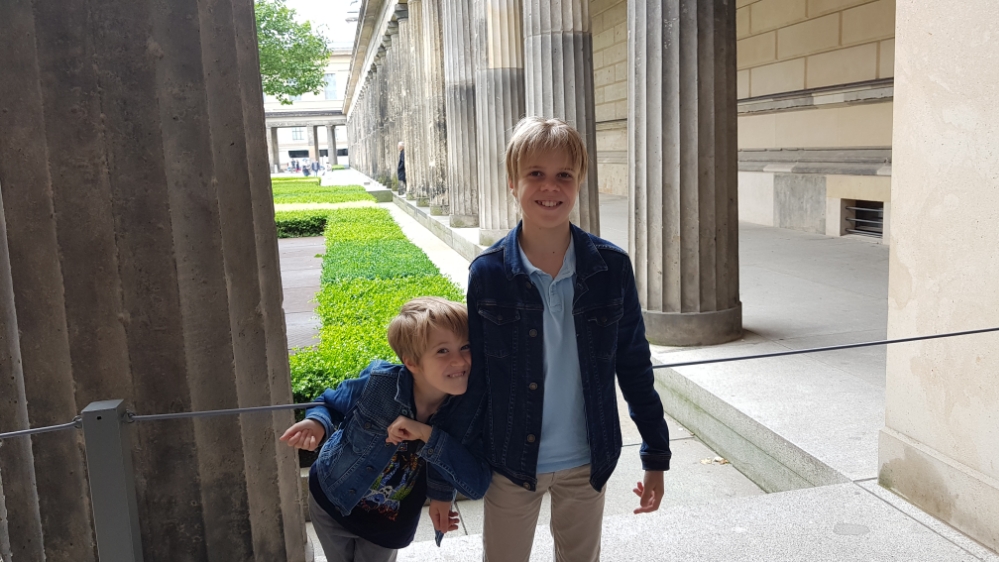 Then to see Cara one last time and we picked one of the items from her list of suggestions so kindly curated for us. The boys had had enough history, so we did art instead: some immersive pieces at the Martin-Gropius-Bau. Martin, it turns out, is the uncle of Walter, and another architect. Perhaps no city I know so celebrates its architects and has so little to show for all that effort, and if I am to believe what I’m told, we do not have allied bombers to blame for that as much as I thought – a lot of the city survived the 1940s just fine and what survived are a bunch of boilerplate neo-classical pseudo-temples and the ubiquitous European four/five storey terraces that someone seems to have hit on in about 1780 and no-one has improved on since. I asked Cara where the centre of the city was. “Nowhere,” she said. I asked where the pretty parts were. “Nowhere,” she said, after a second’s thought. This turns out not to be true. Later we sent to a street fair in Bergmannkiez, and bits of that were quite pretty, as long as one looked up from ground level. Only you couldn’t, because you risked stepping on a broken bottle. 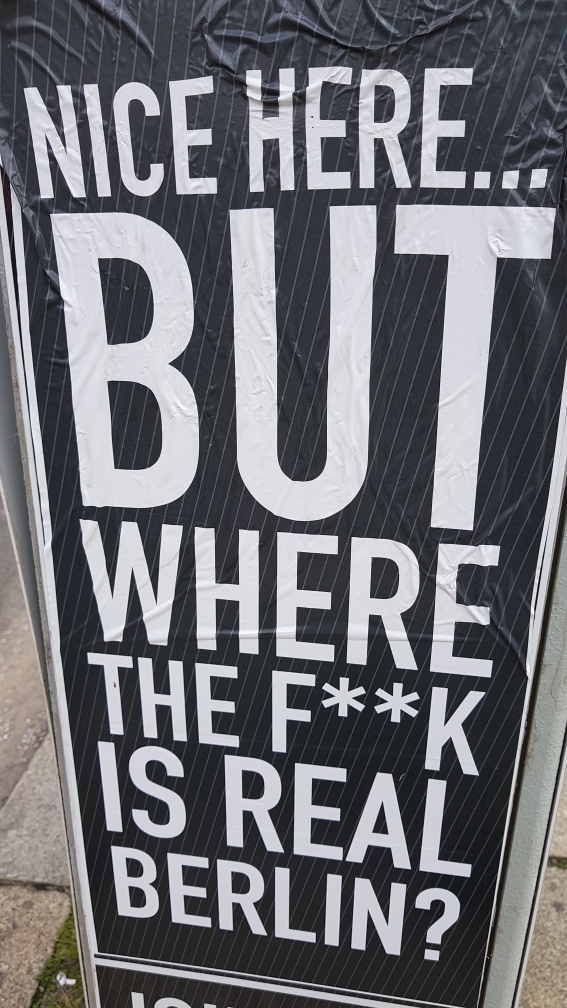 At the M-G-B we did serious art. In a white floral shirt I stood out in a flock of twenty-somethings all in black, but it didn’t matter because the first exhibit required us to don black jumpsuits to which were strapped flashing and vibrating lights, then goggles that fogged our vision, and we were then squirted into a multi-occupancy womb consisting of several darkened rooms, empty but for a handful more LEDs, intermittently visible as glowing blurs. I quickly lost everybody and then myself in musings on art’s attempts to mimic drug states. Perhaps I have that backwards, and all amphetamine chemistry has been an attempt to recreate van Gogh and Dalí directly in the brain. Be that as it may, I found the piece quite soothing, and would have found a corner to curl up in had I not been nominally responsible for two children, both of whom I had just lost in a darkened room full of trippy sounds and fuzzy glows in a foreign country. When my fairly lazy conscience finally pricked me, I found the guide rope and made my way out.

That was certainly the most diverting of the pieces. I found a screen showing what seemed to be actual simulations of merging black holes, which triggered an interesting conversation with Seb, which boiled down, as it has before, to, “we don’t know, because we lack a quantum theory of gravity,” and you try saying that in terms a seven-year-old can grasp. Another work seemed thematically related, using a water tank to conduct the single-slit experiment of yore, projecting the edge-vortices onto the ceiling, a hydrodynamic effect I’d not previously seen. Was it Art? I don’t know. I couldn’t dance to it.

We finished with a virtual reality movie, a standard dystopia and invitation to free your mind, man. Raf enjoyed it. If the engagement of a twelve-year-old was the artists’ aim, they succeeded.

Finally, the street fair on Bergmannstrasse, near the Marheineke Markthalle, where the kids bouncy castled over and over. There I met Andi’s friend Torsten, wife Sibylle and little Fritzi, the last of whom I think I mortally offended. Remembering that I’d been told her age earlier, and filed it away as “only one year different to Seb”, I asked if she was six. She is, of course, eight. I will apologise if I ever see her again.

We weren’t at the fair long enough for me to pump Torsten for embarrassing stories about his childhood friend, as the kids were starting to flag. Final goodbyes, and we were off back to the hotel. One moment of panic as the U-bahn doors closed with Raf on board and Seb and I still on the platform, but a fellow passenger hit the button in time and he was restored to us. The next train, we all made it on, and back to Nollendorfplatz for the last time.

Overall impressions of Berlin? I have felt comfortable here. It seems to have norms and mores similar to those I’m used to. It wears its contempt as unselfconsciously as its amusement. It seems, genuinely, to have no functioning centre and is a patchwork product of its history. If it would be a less fun place to be young with money than Rome, it seems at least that it might still be a vital place to be young without money. The soundtrack, I think, would still be punk. No harm in that, but I am used to thinking of punk as something a person – or a city – outgrows. If I come back in decade, will it still be punk, or elevator pop?