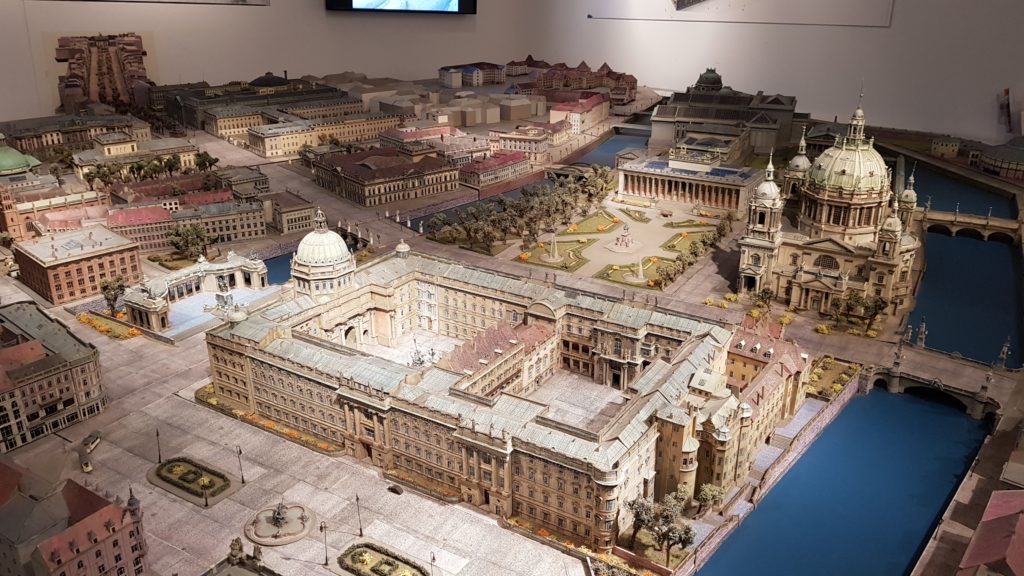 To travel by U-bahn is to be deceived. Overground, Berlin sprawls.

I had promised the boys the day to do as they pleased, including to sleep in as long as they wanted. They took me at my word, and we slobbed about until after 11am, Seb and I making it all the way across the street to achieve breakfast, Raf content to lie in and be fed on our return. We all deserve breakfast in bed occasionally.

Eventually, we were off to the Mall of Berlin, solely because it advertised a spiral slide that ran two floors from top to bottom. We got there and I had currywurst, because this is Berlin. The boys slid. Once. Bored with that, let’s go. Where? No idea, Dad.

OK, so back in the driver’s seat, I took us to Alexanderplatz and the television tower. An hour wait, but this is Germany, where you wait by taking a number – none of this tedious standing in line – so we went and had ice cream, and then went back, and up, and took photos. My strongest impression? The Tiergarten is bloody huge. Due to the weather, we’ve still never set foot in it. 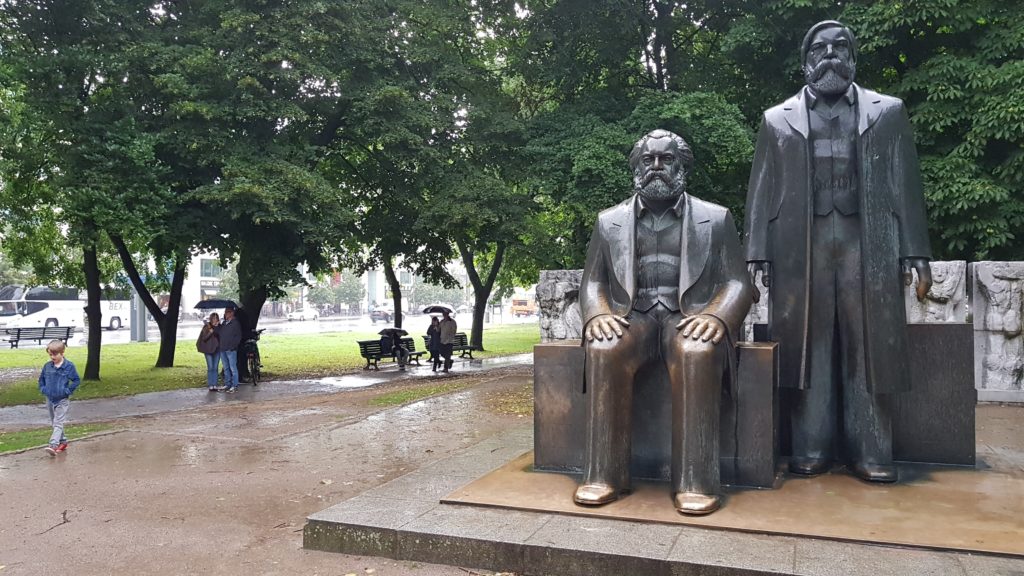 Down again and I dragged us one bus stop, in the suddenly soaking rain, so I could take a photo of Marx and Engels, presumably (like the tower) residues of the former communist state. To do so, we ducked under a bridge, walking by a group of men who sleep there, shouting at each other (and us, for all I know), men old enough – if they were locals – to remember communism, and with no reason to think terribly much of the system that replaced it.

The number 100 bus down Unter den Linden which I wanted to take was, according to its electronic bus stop, “delayed due to demonstration”. Whatever it was, it didn’t make the BBC News website, so I assume Chancellor Merkel’s government is in no imminent danger. To my surprise, the boys decided that they wanted to go into the museum that is the nascent Humboldt Forum, the institution that is to occupy the revivified Stadtschloss. The “museum” is one room dedicated to the process of rebuilding the palace, which contains a paper model of the area surrounding it as it appeared in 1900. The model curiously includes buildings, parks, fountains, even horses, carts and a handful of motorised vehicles, but absolutely no people who might be horrified to be informed of what the terrible twentieth century would bring to their city, or to live in some magically resurrected Belle Epoque when the work is complete. Here, perhaps, is what the city planners are trying to achieve by recreating an imperial building that was destroyed decades ago in a democracy that cannot house its people – a Berlin as it would have been, had its fortunes not included defeat, devastation, era-defining evil and deadening tyranny. A Berlin as it Should Have Been. If so, they will fail. And should fail. All the ghosts, all the people impoverished in the name of solidarity enforced at gunpoint, all those still living under bridges in one of the richest countries in the world, will defeat them. Sticking Mickey Mouse ears on history and declaring the past over and safe is dangerous nonsense, as I thought Germans, of all people, knew very well.

With no buses, I asked the boys to walk down Unter den Linden to the Brandenburger Tor. It should have been a stirring walk. Instead, it is a building site, the Champs-Élysées with the plumbers in and bits of the dishwasher all over the carpet. We got to the gate, photoed, turned the corner to see the Bundestag (all flags at half-staff, presumably for Helmut Kohl’s funeral) and caught a bus. To see a bit of the city, I went further than we needed to, all the way to the Zoo, taking us, without realising it, back to the U-bahn stop where we first surfaced in Berlin three days ago. And now, at last, I saw the other Berlin – the pristine streets, the shopping district, the first world capital of an economic power that I had subconsciously been expecting this whole time. I had seen it, of course, in the mall this morning, but in one isolated spot it made no impression. Here we drove though West Berlin, every bit deserving of the capital letters, five kilometres and many euros away from the bridge under which we had walked to meet the author of Capital. The Brandenburg Gate, the Tiergarten and the whole length of Unter den Linden now seemed less a cultural precinct than a cordon sanitaire. There is still a wall, but now it’s built with money, not concrete.

All foolish maunderings of a naïve and ignorant foreigner, no doubt. But if I’m right, I finally understand why this city gives me a sense, now and then, of what tastes a bit like righteous anger. Why I learn of a sit in by leftists over a building lease that needs hundreds of police to break up. Why I should not in the least be surprised to learn, a year or a decade from now, that Berlin has spawned more serious political violence, or transgressive and transformative art, or just possibly both.