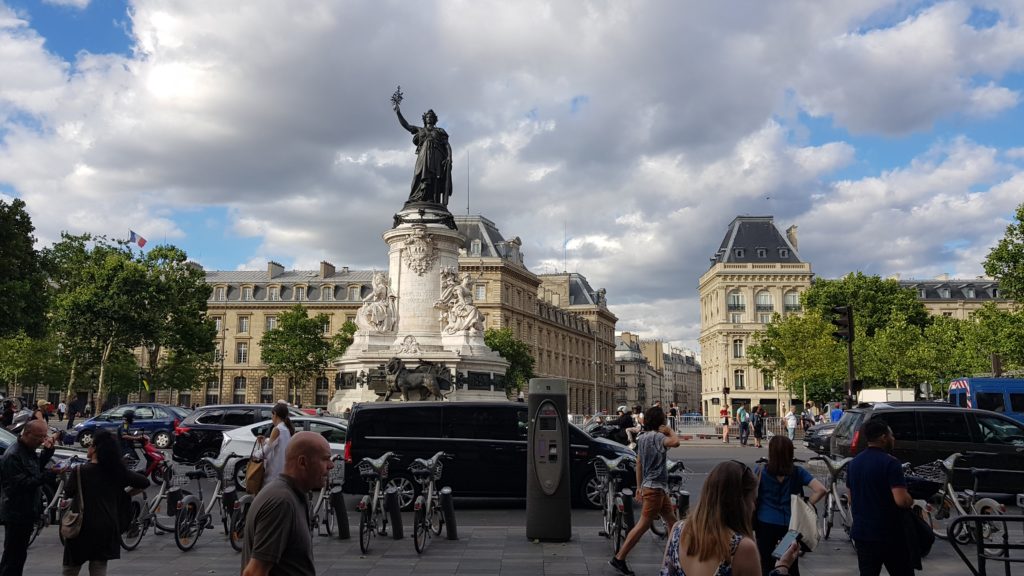 I’ve moaned before that a couple of hours travelling takes up a whole day, but anyone who wants to cram more excitement into such a day would be advised to come to Paris, which offers that combination of insouciance and incompetence that is the envy of the rest of the world. Having Eurostarred from St Pancras to Gare du Nord, we metroed to République, then footslogged to 2, rue Sainte Elisabeth to pick up our key from our intended hosts at Short Stay Group Paris. Remember that name. The key obtained, we slogged and metroed and slogged some more – now about 8. 30pm and Seb visibly flagging under the weight of his bags – to the Eiffel Village Apartments at 17, rue Fondary. Which turned out to have one bed in its one room. I rang our hosts. The woman who answered excused herself and said she’d call back. Five minutes later she did, to advise that it was a clerical error, that they had nothing else to offer us, and that we should look for a hotel. Just managing to keep my temper, I told her that it was totally unacceptable simply to dump us on the streets of Paris at 8.45pm, that I expected them to find alternative accommodation and send a taxi to take us there at their expense. She said that she quite understood my position and would speak with her manager, call you in 5 minutes. Nothing. Twenty-five minutes later I rang again, to be told that the office was closed, and the man speaking to me was there only to deal with late arrivals. He could do nothing to help. I could actually hear him shrug.

Fortunately, Raf and I were able to get a room a few doors down at the Amiral Fondary, where the night concierge Camellia could not have been more helpful. Our room on the courtyard is simple, cheap and perfectly adequate to our needs. The cat’s name is Hermès. I am sorry that, unless there is a cancellation, we will be forced to move on tomorrow, and I recommend it to anyone wanting a place in the 15th arrondissement (just round the corner from the Eiffel Tower) for €80. In contrast, you would be well advised to shun the Short Stay Group like a case of herpes. Tomorrow, I suppose, I will have to spend a slice of one of only two days that we have in Paris ensuring that we get a refund and dealing with people I would be very happy to learn have all burned to death. Not to mention making alternative arrangements for the remaining two nights. But, as I believe they say around here, c’est la fucking vie.