After chasing us all night, the sun finally caught up with us as we descended into Dubai, where I had cleverly left us about nine hours to pop in to the city and get my first ever look at a Gulf state. Starting before dawn, during Ramadan. There will have been less successful military campaigns launched with such enthusiasm, but very few whose survivors were prepared to talk about them afterwards.

Dubai Airport is a kilometres long Herbertian sandworm that manages to look both uber 21st Century and slightly tired at the same time. It has a model of itself inside Terminal 3 made of date pits. Through a space station connecting tube we went, to a metro train of a cleanliness in which one could confidently perform surgery, provided of course that one were a confident surgeon. Competition for seats is a fast, physical but fair game. Unlike the Seaford line, at 6.30am most of the passengers are men. Station and “mind the doors” announcements are made in Arabic and English. Some sardonic amusement was found in a contemplation of the response, among that section of the Australian electorate that views Muslims as unintegratable rejectionists, were Arabic (or Chinese) announcements to be heard in Australian trains. 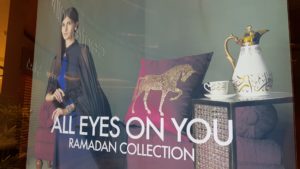 At the suggestion of a local on the platform, first to the Mall of the Emirates, with the suggestion that we get outside and see the Burj al-Arab. The mall is sprawling, and empty, and dead. I wandered outside, ready to brave a walk, but was overruled on the grounds that in such conditions children have been known to melt. A major problem is that we have no water, open shops being far between. So back on the metro to station Dubai Mall/Burj Khalifa. The mall is ridiculously large, the Burj Khalifa is the world’s tallest thing, probably, maybe discounting a radio mast or two, and all of them are a good 2km walk from the station that bears their name along more damn tubes.

Once in the mall, still nothing is open except a couple of fast food joints behind a screen, which will serve the kids some food, but not us adults, even non-Muslims expected to make the token effort of lasting until noon.

Having walked kilometres on nothing more than a couple of Ritz crackers scarfed in the loo, the Burj, it was decided, could get stuffed. Back to the airport where, Allahu akbar, a coffee shop is open for unbelievers, even those wearing Emirates Airlines uniforms. Reconversion of our unspent dirhams back to dollars takes but a moment. Waiting for the plane to Barcelona takes longer. As usual, I pull faces at a child until Mum speaks to me. She’s an Indian woman, living in Dubai, off to Paris. Europe, she tells me, is not what it was, the immigrants are running everything. I smile and tell her that I’m an immigrant. Oh, not like you, she assures me – the ones who won’t assimilate. 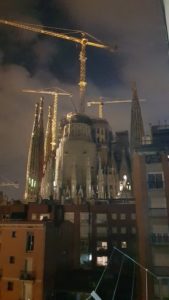 Arriving at Barcelona late, we only have time to grab a few supplies before collapsing. The shopkeeper chats with some local kids.  Used to dealing with tourists, he has pretty good English, in which he tells Anna that he came here 19 years ago from his native Bangladesh.

To the apartment and bed, eventually, once we’ve worked out the weird door lock. The view from the balcony is of a construction site. It’s quiet, though, and shouldn’t disturb our sleep.

Europe 2 – We Have Come Down
Tagged on: Emirates    Europe    Ramadan