The Castle Dungeon show manages to scare Seb into something I’ve never seen in him before – an unwillingness to admit his fear. Affected, I think, by the “volunteering” of his mother to be disembowelled in shadow play by a plague doctor, he repeatedly demands to be allowed to leave, a tremor in his voice, on the grounds that it is boring. Until the torturer shows us into which proverbially unsunny orifice he would sometimes fit his spiky hook, at which terror is chased away by mirth.

After the castle, Stratford-upon-Avon, where we nod towards Shakespeare but spend almost all of our time at the Museum of Mechanical Art & Design, a small but terrific display of Heath Robinson devices and marble run whimsy. The kids settle in for a play.

And they need and deserve it, for the next step is the 90 minute drive back to Henley and my sole surviving grandparent, 101-year-old Audrey. I have phoned ahead several times in the days since we reached the UK – twice this morning alone – without getting hold of her. It is clear that she is spending much time sleeping. As she is when we arrive. When awoken, we try carefully and repeatedly to explain who we are, and it seems at last to sink in. She cannot believe it is possible, and says so, repeatedly, along with her conviction that she has led a fortunate life. By the time I leave after half an hour or so, she and I have been able to talk of my mother – her daughter – and the other members of my family, and I am satisfied that she grasps her relationship to me and to her two great-grandsons. She asks me to write it down, which I do. We admire her letter from the Queen. Anna and the boys leave us alone for ten minutes. At last, I say goodbye, and slip out to join them before making our way to Steven and Louisa’s, which after two emotional days away, feels quite a lot like a homecoming. Curry for dinner. All I need now are some slippers. 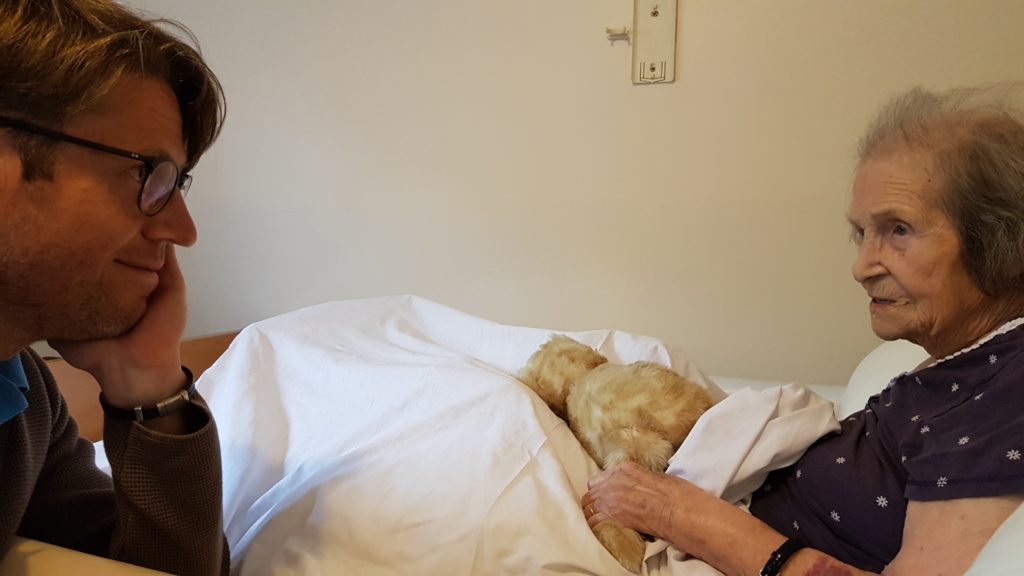 Europe 18 – God Has Been Kind
Tagged on: Europe    United Kingdom