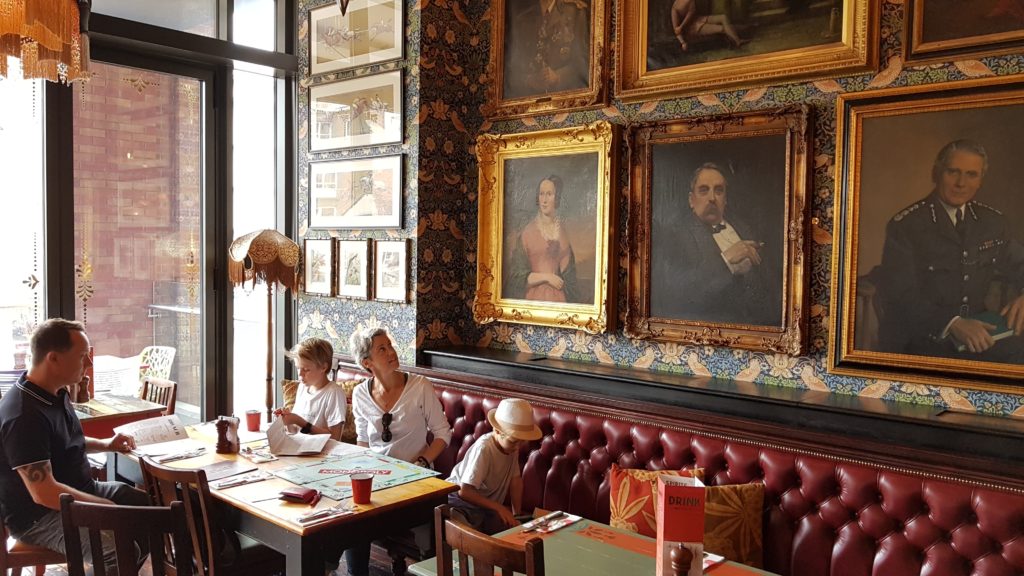 Thrifty had nothing. Enterprise Rent-A-Car had nothing. Starting to panic now. On the phone to Europcar, who cheerfully take my order for a small hatchback. Ten minutes walk to the outlet later – they don’t have any either … at least not in that class. For the car we do have, Sir, the hand-painted Mercedes with the platinum rims and the satnav voiced by the actual Duchess of Cambridge who is physically present in the car – that would be mumblety-mumble pounds for the two days. I say, Sir, what a remarkable colour – are you unwell? Roger, a chair for the gentleman, quickly.  Something you ate, perhaps. I was about to say that, as it is a change to a booking we can’t honour, I will be able to offer a discount on the upgrade fee, and perhaps Sir will not need to sell both of his kidneys.

For sure, it’s a nice car. I’d still rather be in my Subaru – sneer all you like. It gets us to Coventry, anyway, and I suppose one shouldn’t cavil at the cost of any car capable of transporting one back in time forty years. Up the M40 we go, pausing only to order a medium-sized coffee at a roadside pseudo-town, which is served in a bathtub, leaving me to wonder at the enormity – and here I use the word strictly in its traditional sense – that a large one must represent.

Steven has come with us, back to what is, after all, his native town as well as mine. The first thing we see, from an odd angle, is the sports centre, which he has spent an hour, and will spend another, trying to convince me is in the shape of an elephant. We end up googling images that might show it to best effect, but it turns out that all angles for viewing the building are odd. I remain unconvinced of its pachydermicity.

Next, up the tower of the old cathedral. This year’s half-season of football has stood me in good stead and I’m not breathing too heavily as we summit. The views from the top allow us to see much of, well, a depressed Midlands city of no particular beauty or distinction.

Down to the statue of Godiva and the famous, or at least somewhat memorable, clock, which hourly re-enacts her celebrated ride via the magic of clockwork. That is, it used to. Some locals of a recognisably English cast – a history of poor dietary choices and an innocence of remedial dentistry obvious – tell us it hasn’t been working now for eight months.

Lunch, at least, is acceptable. I am quietly impressed with the home town boy nonchalance with which Steven, a discerning gourmand in daily life, orders the fish finger sandwiches. The shade of my father compels me to the beef and Stilton pie with mash and, crowning glory, mushy peas. 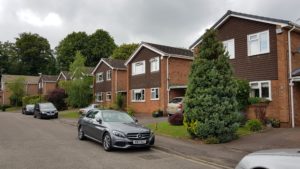 And then Allesley. We’ve kept Sheila Staples waiting too long. But she’s there, and very welcoming, albeit tied to the phone, waiting for a call from her solicitors in connection with the sale of her house that never comes. But she has alerted Dick and Jean Skinner, current owner of 13 Allesley Croft, my childhood home, who are waiting for my knock. So we go, and knock, or rather press the button. Jean practically pulls me inside like a long lost child, and we get the full tour, no room barred to us, happy for me to snap away with my camera. Much changed, of course – the grass in the back garden gone, all the fixtures very modern, an inkling that the door to the living room has been moved sometime in the intervening decades, but the same house I mistily recall, the kitchen in which my father made tea every morning, the same stairs up to the same bedroom I last slept in 41 years earlier.

From there, Steven and I walk down to the entrance to the croft and round the back on my once familiar walk to school. The thought springs into my head that on this turf (open then, populated with blocks of flats now) there used to be daisies – the first flower whose name I positively associated with the variety. Five paces later, I bend and pick one, my head spinning. 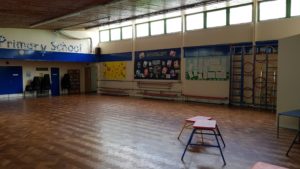 The school is next. From the proper, actual gate where I used to enter we’re forced to traipse around to what Yeoman insists on calling the front entrance, on the flimsy basis that that’s what it is. As if reality is sufficient support for any proposition, on this of all days. School’s out, but there are still a few people about. One teenage lad, just off the sports field or something, holds open a door for us, which he almost certainly shouldn’t do, and we nip in and try to find a responsible adult to turn ourselves in to. We run across Adele, one of the staff, who believes our story and with great generosity gives us a guided tour of the junior school where we both spent our first few years. To both of our utter astonishments, the assembly hall is practically unchanged, right down to the parquet floor. It’s only shrunk a bit. 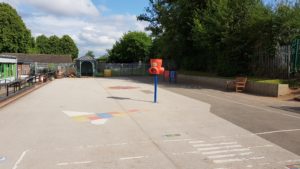 Also little altered are the junior rooms – Adele calls them Core Stage 1 or some similar modern jargon. The same rooms are still in use for kids the same ages as we were in 1974/5, and the doors lead out to the same asphalt yard edged with the same concrete flagstones. The sense of chronological dislocation was vertiginous. Memories didn’t flood back, but instantaneously and delicately came into being, one following another, like a movie of soap bubbles popping watched in reverse. Snatches of play in the second courtyard, dreams – perhaps experienced after emigration but still, certainly, before the age of eight – of searching for things in the assembly hall, the spelling test in which I was robbed of a mark by attempting humour rather than accuracy. Both Steven and I walk away from the school in a state of some emotion.

A short walk (from the so called “front gate”) takes us to Steven’s old house in Anglesey Close, but he feels no need to disturb the current owners – he has been inside far more recently than I in Allesley Croft. Down to the Birmingham Road – coincidentally passing Anna and the boys who have ducked out to find a drink and, no doubt, relief from all of the nostalging. Reconfirming our deal to meet up back at Sheila’s place, we Allesley Old Boys peep into the building that once housed our play school, now half a dance school and half either an abandoned shell or, if the sign on the front is still current, the grimmest youth activity centre I’ve ever seen. Which is, of course, saying something.

After a final cup of tea with Shiela, we’re off towards our rest for the night in Wellesbourne, near Stratford. Anna is driving, as she has done the whole time, but this time it is necessary as for most of the drive I cannot see for tears.

Europe 17 – The Past Is Another County
Tagged on: Allesley    Coventry    Europe    United Kingdom