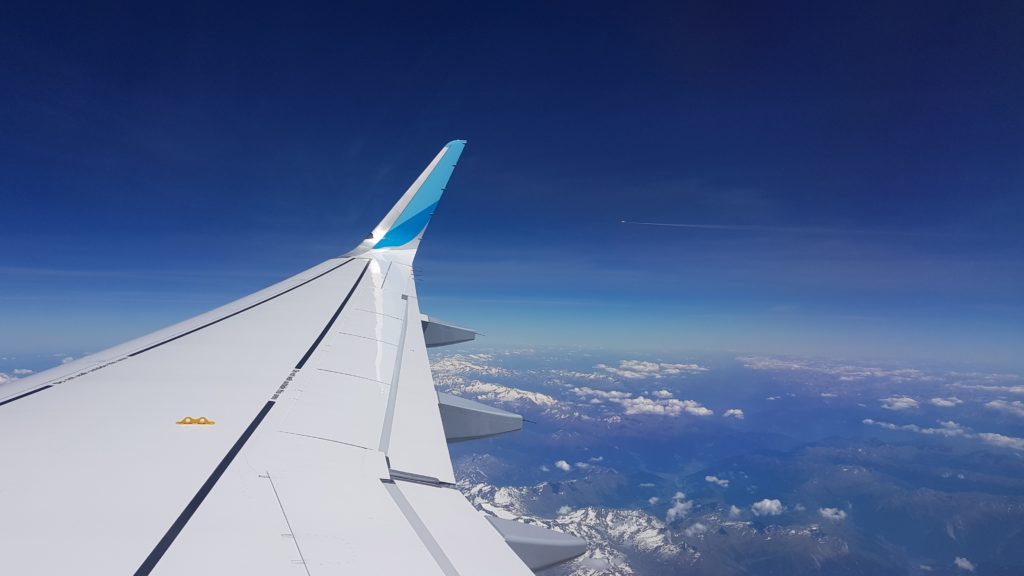 Another day travelling. Alilaguna water bus to Venice Marco Polo, surely the only international airport named after a t-shirt. Thence to Düsseldorf, my first time in Germany. Terrific to see the Alps, snow-capped even in late June (but for how much longer?) but the most exciting part was certainly seeing more than half a dozen other aircraft, sometimes two visible in the sky at once, leaving behind curiously dark contrails like black smoke smeared across the sky. When they flashed past in the opposite direction, for the first time ever a real sense of the speed of jet travel was brought home. 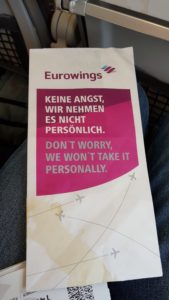 We were 45 minutes late getting off the ground at Venice, and correspondingly late into Düsseldorf – 80 minutes between connecting flights cut down to about half an hour. After a toilet break, we made our way as quickly as we could to the departure gate, at times breaking into a jog. At passport control, the official, “polizei” on his shoulder, radiated a lack of impressedness and raised his eyebrows not at our suspicious foreign documents but our boarding passes, which confessed our lateness. At the gate itself one of the ground staff noted, with the same lack of expression with which an aristocrat might advise that one does not spit on the carpet, that we were “a little bit late, sir,” addressing me, despite Anna being at the front with all of the documentation at the ready. I veered towards my tutor, but she indicated the other desk – her role was not to check our papers, merely to point out that we had infringed the rules.

To Heathrow, and a terrific chat with the taxi driver Steven had arranged – an expatriate Algerian, who made us play guessing games over the origin of her accent, half Maghreb, half home counties – a game we’d never win. It’s Ramadan still, of course, but as a diabetic she no longer fasts. Her daughter, just 14, has been doing it for three years and loves it – a chance to lose some weight. At the girl’s single sex school in Maidenhead, her classmates are careful not to eat in front of their friend.

Finally, to Steven and Louisa’s, where we renewed our acquaintance with Stella and started one with Agnes, who was only a bump when we last saw our friends. Made to feel very welcome, an easy and chatty first night in England. We’ll sleep well tonight.