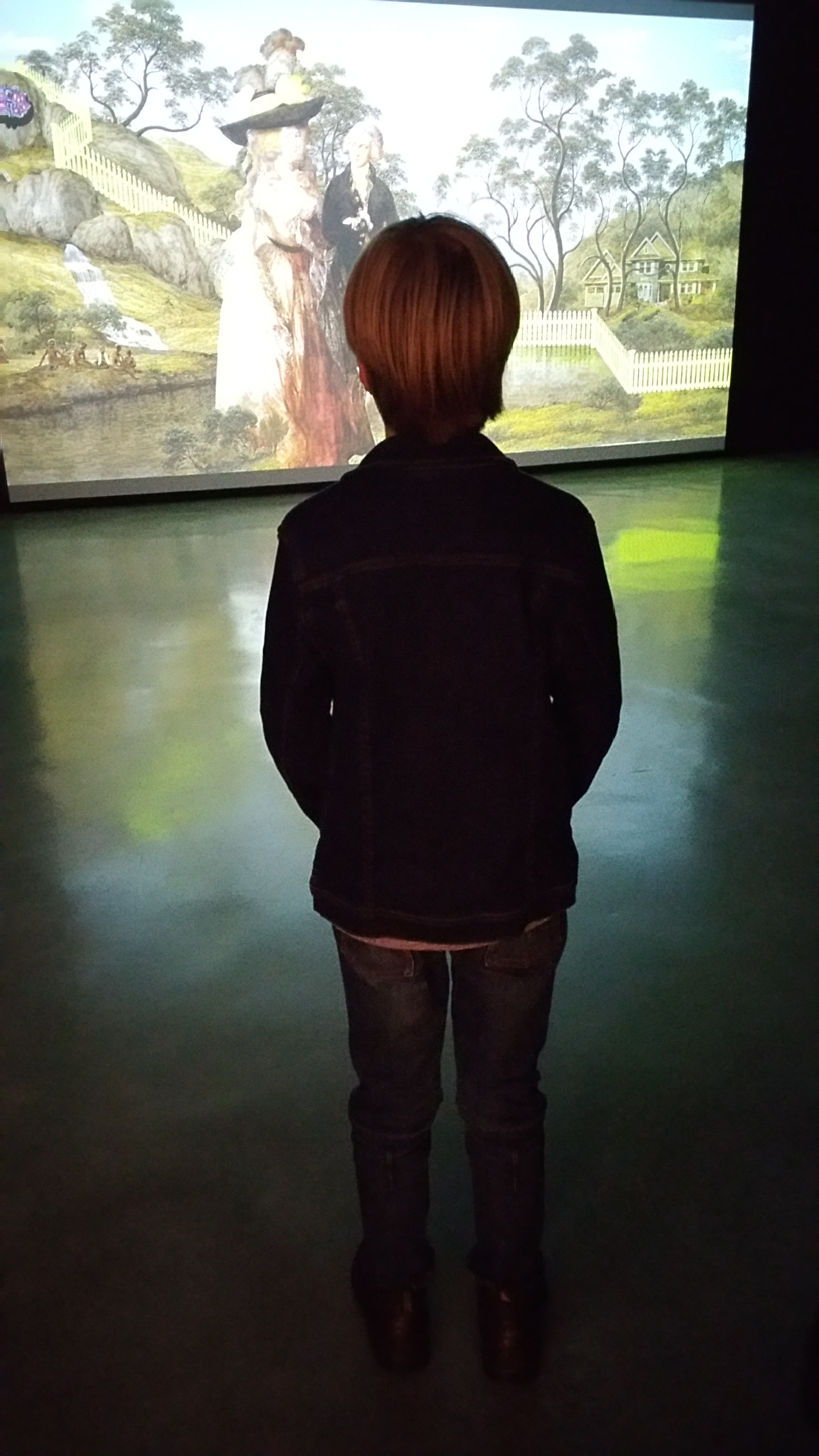 A day of rest, mostly. I tried to encourage thoughts of Things We Can Only Do In Sydney but it was like pushing blancmange. And fair enough – we have done much, and we needed a break from our holiday. Raf’s thoughts, in any event, are in a very tight orbit around the naked singularity at the heart of the universe also known as a quadcopter, and no true happiness was going to be possible until we had returned to Hobbyco and done the necessary.

Who am I to fight the laws of physics? But I did nudge a slight detour into our path, if that metaphor is not wholly backward (which would make it what, a phoramet?). “Just half an hour” at the Museum of Contemporary Art, I promised, and was very pleased that the exhibitions made it unnecessary to insist on the letter of the contract – the boys, I think, found enough to intrigue and engage. The picture above is of Raf in front of his favourite piece – an animated work commenting puckishly, if I am any judge, on the relationship between humans and the land, both before and after European settlement. Perhaps the medium will spur some notions in Raf of the artistic possibilities which digital tools present. Seb selected for praise another work of bold, flitting colours called into life on display panels using a technology of small, reversible black and coloured discs, electronically controlled, akin to that on airport departures and arrivals boards in the era before LCDs became ubiquitous. He liked, he said, the movement.

From the MCA to the QVB, where the copter was acquired. Seb chose another pack of nanoblocks. Thereafter, Raf would not let the copter from his hands. Notwithstanding that, a new wallet was acquired for Seb, while Raf continued to hold out hope that his old one might turn up. To that end, we walked the kilometre and a half to Central Station and the Lost Property Office, a tiny, unkempt room with a staff of one. The only person ahead of us in the queue was a man in deeply worn corduroy trousers – once good quality but now not so much worn as patchily alopecious – enquiring after a lost item of jewellery. After describing the stone, its cut and colour, the official enquired, “So, a sapphire?” The man allowed as how it might be a sapphire, yes, or something like that. While we sat on a low step and waited, the man sat sadly and listened to the staffer’s rote speech, delivered not unkindly, to the effect that the railway’s internal processes meant that it might take a few days for anything discovered to find its way to this office. Finally, he rose and stepped to the door but changed his mind and resumed his seat to ask, as he happened to be there, whether his house keys had by any chance turned up. When the railwayman enquired as to how long ago they had been lost, the sad man confessed it was some months ago. “Ah, no,” said the railwayman, “we keep things only for 28 days.” “But what happens to things after that time?” asked the sad man, and when told they were destroyed or given to charity, he shook his head at the world’s uncaring nature and finally ceded us his place. We had no more luck, of course, but the officer smiled in co-conspiratorial empathy at our confession that the wallet was, unbeknownst to us until after its purchase, made of elephant hide, clucked in sympathy when his computer searches turned up nothing, made a handwritten note in his exercise book of special cases to keep an eye out for in case it should come in in the next day or two and started with every sign of infinite patience to give us the same explanation for the likely delay in retrieval that he had just delivered to Mr Blue, the sad sapphire man. We thanked him for his time, and went to find a train back to the Quay.

We got back to the apartment quite early and settled in for some feet up time. Of course, a try out of the copter was unavoidable, so while Seb tabletted, Raf and I went over Macquarie Street to the grass. While the battery lasted, Raf got his first try at piloting and seemed satisfied.

For want of anything better nearby, Butter Chicken was taken away, and some preliminary packing done. Plans were made by text for the following day and bed was achieved. Seb and I alone for Edward Tulane tonight – perhaps pilots are beyond such things. If so, it is the pilots’ loss, for the book remains a shimmering delight, albeit one that tonight had the reader in tears by the time the light went out.

East of Eden – Day 5 – Culture and Copter
Tagged on: Family