On July 12th, 1960, George Wyatt died. One of the few things I know about him was that it was not the worst day of his life. That day had come eleven and a half years earlier. When George Wyatt woke up on the morning of December 19th, 1948, he was a husband and the father of three daughters; Emily, aged 24, and the youngsters, Dulcie and Thelma, just 17 and 15. By the sunset of that day, he was a childless widower.

It all started with Peter, my de facto father-in-law. Peter has always had a fascination with family history, an interest that took him, along with his daughter and, perforce, me, to the Prospect cemetery, in Adelaide’s northern suburbs, on a warm day more than ten years ago. Peter was hunting for Longmires and Bammans, buried scraps of bone and degraded DNA that once carried genes, some of which he and his daughter share, as would my own sons, in their turn. I got hot, and more than a little bored, and I wandered off towards the Catholic section, where the tacky-grandiose mini-mausoleums promised a modicum more interest than regimented rows of silent Lutherans, whom death had not made any more jolly than they had been in life.

However, even the marble, brass and faded photographs of old people with names ending in vowels could only distract me for so long. I soon found myself walking alone, back among the only Protestants in the state whose condition made them respectable despite their horizontal orientation, when I came across a headstone that stopped me, as it were, dead. The plain, almost square stone listed the names and dates of five people and the briefest description of their relationship – family ties that anyone might guess from the aforementioned data. There was, in fact, only one thing to make the grave stand out, and that was the hammer blow repetition of the date of the death of the four women whose remains had been buried there, nearly sixty years earlier.

In the following decade, from time to time, I would think of the grave, and of the people. Other things intruded. I became a father once, then twice. I worked and played. I forgot the people’s names, their dates, forgot everything but the fact of a husband and father who at a stroke had become neither. A man who had watched and worked as three daughters grew to adulthood, or nearly so (but none of them married, I assumed, because no other surname was given) – three daughters grown to women and then in a single day gone, along with the woman who bore them and worked with him to raise them. In one day (one hour? one second?) from bounty to devastation. And yet not, quite, destruction, because he somehow carried on for another eleven years. 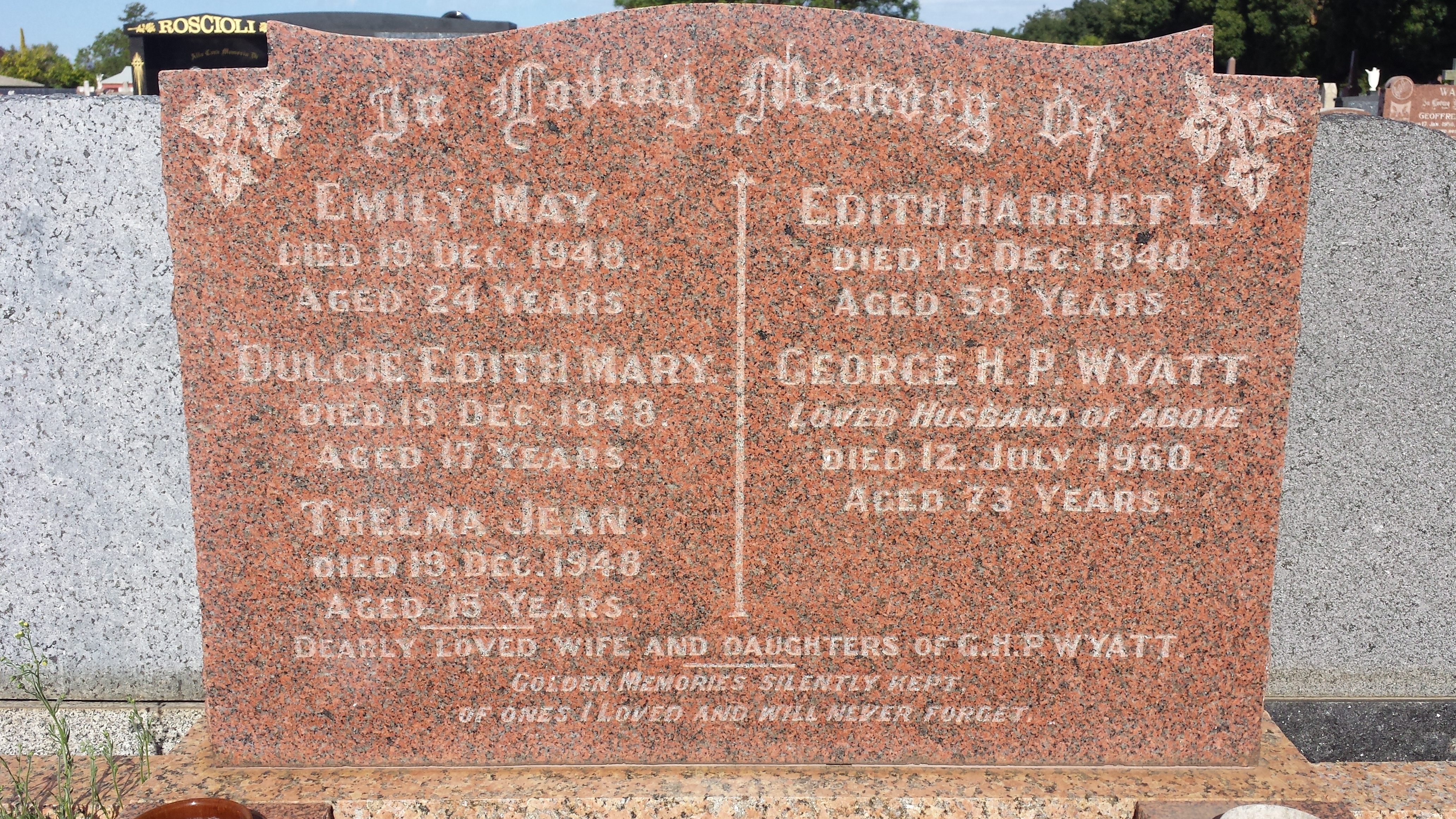 The thoughts wouldn’t go away, and so, on an even hotter day in January of 2015 I went back to the cemetery to find the grave. To take some notes. To see if I could find out what had happened to the wives and daughters of the man whose name I could not by then remember but whose tragedy I could not put out of my mind. I took the photo above, and started to do some research.

The story of what happened on December 19th, 1948, turned out to be relatively easy to find, and quotidian in its horror.

On December 20th, 1948, South Australia’s then major broadsheet newspaper The Advertiser led its front page with news of the landing of Dutch marines in Java and the capture of the “republican” president Sukarno. In another column that makes wistful reading in this paranoid year of 2015, the Australian Prime Minister, Ben Chifley, urged Australians to welcome the new migrants then arriving in the country in substantial numbers, stressing the economic benefits expected from their labour. Whether George and Edith Wyatt paid much attention to world affairs, I cannot guess. If they fretted over the instability brewing in Indonesia or had any particular views on the arrival of large numbers of “New Australians”, they probably did not spend much time discussing their concerns on the morning of the 19th of December, because they had other fish to fry. It was nearly Christmas, and the Wyatts had family plans. Those plans, however, were to come horribly undone, as the same front page told in a handful of short but gruesome paragraphs.

5 KILLED, ONE HURT IN CROSSING SMASH

Father Only Survivor of Penfield Family

Five people, including a woman and her three daughters, were killed in a level-crossing smash at Cavan, near Dry Creek, on the Port Wakefield Road, about noon yesterday. They were passengers in a motor car which was struck by an engine and tender, travelling in reverse from the Metropolitan Abattoirs to Dry Creek. The husband of the woman and father of the three girls was the driver of the car. He escaped with only minor injuries, and is the only surviving member of the family. The victims were:

The car, a tourer, was swept for 150 yards along the line and was completely wrecked.

Dulcie Wyatt, whose arm was cut off and who received a fractured skull, died in the Royal Adelaide Hospital about 2½ hours after being admitted with her father.

The accident was described by police as one of the most tragic for many years.

The party were on their way to a family Christmas reunion at the home of Mr and Mrs J H Stein, in Wilson Street, Prospect. Mrs Stein was a sister of Mrs Wyatt. Police called at the home to inform 30 relatives of the tragedy. Rosewarne, whose wife died recently, was a brother of Mrs Wyatt and had been staying with the Wyatts for a few days.

An eyewitness, who was driving a car in the opposite direction, told the police that he saw Wyatt’s car slowly approaching the crossing, and it was in the centre of the line when the collision occurred.

Wyatt was apparently hurled clear of the wreckage a few seconds after the impact. He was conscious when admitted to hospital. When the engine was pulled up, pieces of the car were found scattered along both sides of the line. Among the wreckage along the tracks were several gifts in Christmas wrappings. The police were told that a wig-wag warning signal was in operation when the accident occurred.

Another witness told the police he thought that a small mob of cattle near the crossing may have diverted Wyatt’s attention from the engine and tender.

A large squad of police under Inspector C W Peak, from headquarters, was soon at the scene of the accident. They found three bodies along the track and another was dragged from beneath the engine. The civil ambulance took the injured to hospital and the bodies to the city Morgue.

As simple as that. And, as quick as that, a whole family – five lives – were gone, and another was surely mangled beyond recognition.

It was that life devastated but not ended that would not leave me. Any suffering experienced by the dead was, presumably, very brief. It is tragic when the young die, but we all die young. It is horrible to lose a spouse, but the alternatives are not obviously better. It is more nearly unthinkable to lose a child, but even that can be borne, and many do. But George Wyatt lost them all, all four, all those decades of family and love and fear for them, tenderness and exasperation, hope and warmth and life. He lost not just loved ones but also himself – a husband, a father, a brother-in-law – all these things he had been and was no more, all in the time between one thought and the next. The moment when he first became aware of what had happened, was told of the deaths, must have been unimaginable pain. And then again the next time he woke, and found it was still that same world, the one in which this unthinkable thing had happened. And the next day, and the day after that, again and again. To have to live with that, and yet still live. I could not but wonder – did he? How?

An inquest into the accident took place the following January. It was brief. The News of Adelaide reported the following.

No evidence by sole survivor

An elderly man tearfully declined an invitation by the City Coroner (Mr Cleland) to give evidence at an inquest today.

Tearfully, Mr Wyatt said he did not wish to give evidence. He then added, “My attention was turned away by the cattle. The cattlemen were doing a good job with them.”

Mr Wyatt, walking with the aid of a stick, was assisted from the courtroom.

Arthur Robinson, laborer, of Gum avenue, Burford Gardens, said he was at the head of the cattle. He thought the car was going to pull up, but it went on slowly.

And there the story ends. Almost. I can find one later reference to a George Wyatt of Penfield, in a farm report, recording his sale of some lambs in January 1950. Thereafter, he disappears from the record. I don’t know if he kept on farming. I don’t know if he had other family to help him through those years. I only know that in 1960 he died, and was buried alongside the family he had surely once thought would attend his funeral, trying to keep the grandchildren he never had from making too much noise and disturbing the solemnity of the occasion. And in the intervening eleven years, I wonder, how much of his waking life was spent thinking, “If only.” And how much thinking, “My fault. My fault. My fault. My fault.”